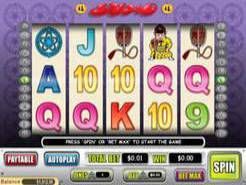 Play Now
Your first impression of Sumo as a slot game may not be a good one. After all, there are so many games out there today that offer fun and entertainment, 3D graphics and numerous quirky features that this one might look too basic. We’d recommend you give it a chance though, especially as it comes from Wager Gaming. Let’s see whether the somewhat basic exterior hides a little more than you might initially think.

What can you expect from the game’s reels and paylines?

Things start quite normally here, with five reels in play and 25 lines to bet on at most.

Can you make good bets on the game?

Yes, you’ve got the chance to try this as a penny slot, but you could also go ahead and bet a five-dollar maximum on each line.

Does Sumo have special symbols?

Yes, the sumo wrestler himself is the substitute in this game. He is also the most valuable symbol, since he can appear five times on one payline to deliver a 5,000-coin top prize. He can also stand in for other symbols if he can form a winning combo by doing so. Watch for the trophy as well – this appears as a gold trophy on a flat blue background. This is the scatter, and in this game it only needs to appear twice anywhere to give you a win. However, three of them, or more, can also provide you with access to the trophy feature.

Can you play a bonus round?

Yes – this is the trophy feature mentioned above. This is a fairly ordinary bonus in that you get nine trophies on the screen. You basically have to click on each one to see what prize hides behind it. Each one will be given to you once all the trophy prizes have been revealed, so you are a guaranteed winner in this game.

The game is not stunning in any way, and there are no free spins here either, which is quite surprising since so many other games have them. You’ll have some fun playing it and the guaranteed prizes in the bonus round are good to know about. But will it be a favorite for you? You have only to play it to see how you react to its treats to see whether this could be true or not.
Play Now